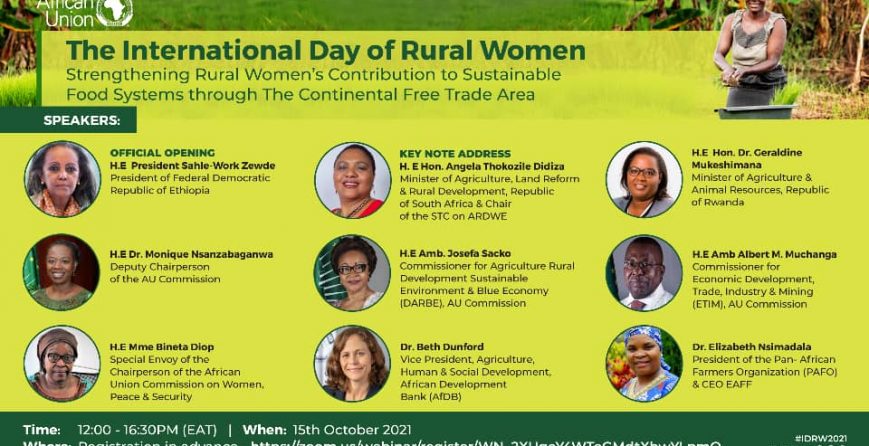 The International Day of Rural Women was established by the United Nationals General Assembly in its resolution A/RES/62/136 of 18 December 2007 and observed on 15 day of October every year. This day, recognizes “the critical role and contribution of rural women, including indigenous women, in enhancing agricultural and rural development, improving food security and eradicating rural poverty.” This year, the International Day of Rural Women will celebrate the vital role that rural women and girls play in building food system and participating in trade. The Department for Agriculture, Rural Development, Blue Economy and Sustainable Environment Agriculture of the African Union is currently leading interventions under the theme “Strengthening the contribution of rural women to sustainable food systems and trade”.

The rural women constitute one-fourth of the world’s population and they play a critical role in the rural and national economies of most of the African countries. In most parts, they participate in crop production and livestock care, provide food, water and fuel for their families, and engage in off-farm activities to diversify their families’ livelihoods. In addition, they carry out most of the unpaid care work in rural areas including caring for children, older persons and the sick. They are also the predominant labour providers in agri-businesses and agro-industries. As such, it is critical that their contributions be recognized, and that they are included in decision-making processes at all levels of governments, and within rural organizations.  The economic ic empowerment of rural women is also key, If rural women had equal access to productive resources, agricultural yields would rise and this would substantially reduce hunger in the continent.